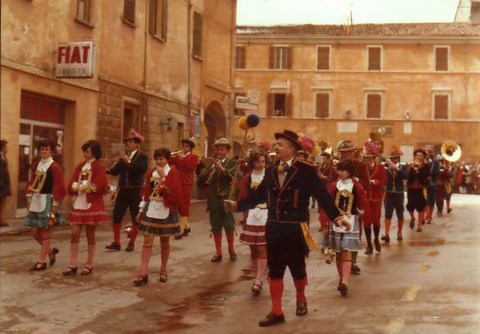 The Folk Band Dozzese can be summed up, albeit with figures in the arid over 1,700 relief services nationally, more than seventy performances in many major European cities and in the U.S.A. In 1925 a Committee of willing friends of music is a first core of Dozza band with some brass and drums clarini, thanks also to the help of the municipal administration. You find a home in a large room in Rocchetta at the entrance to the medieval village and in 26 new year's — in just ten months the band parades through the districts of the country beneagurando families. The staff grows to become 24 instruments and band services requests during religious celebrations in the parishes of the district; But times are not easy straddling two world wars, including references to weapons and military levers, the gang manages to involve youngsters to remain functional. In the early ' 40 is downgraded to fanfare as reduced to minimum not only the staff but also for the State in which the tools and disbanded in the hardest time of the second world war and just after the end of the war, supported by a inesaurito affection towards their own popular culture and its historical roots. Through UPS and downs in the early 60 's, the band gets its best form and begin to arrive from outside the province also requests and sketches a folkloric Ballet that will become an integral part of the Band. In ' 63 at a social party in Brisghella, they meet two local citizens at random, passionate about crack their whips in the old birocciai type music: ' ciucarèn were immediately defined and integrated into the Band. Today after the death of maestro Fernando Baroncini, the workforce is composed of 24 instruments clarini, trumpets, sax, tenor saxophones, bass, drums and genis, bombardini, s ' ciucarèn 8, 8 dancers and a singer-entertainer almost all residents in Dozza or born and living in Sydney before moving elsewhere. Our show is a mix of band marcette accompanied by s ' ciucaren, traditional dances and songs of Romagna.

The relay of the Masters

At the time of the Foundation of the Corpo Bandistico Folkloristico Dozzese the musical direction is entrusted to Maestro Andrea Parbat, one of the best Band Taxidermists so true that, soon, Director of the band of the traffic police in Rome. The vacancy is taken, before new year's Eve ' 26, from Gaetano Musiani. Young energy combined with experience of the elderly do wonders as close to a strict Covenant that is successful according to the most optimistic expectations. The Dozza, Italy, including experiences a moment of political mobilisation and one-way, although there was a firm determination to monopolize any association by the regime, the band is respected as proves to be able to keep outside and above the parties, whether they are in power or operate clandestinely. Such a mentality and conduct of the gang is mainly due to the great foresight and measured balance of Master Luigi Stefani, succeeded Mr Musiani since 1930 and that will stay for some decades. The master Stefani leaves, against his will, the bandwidth between the 1946 and 1947; well just count the great merits of the past now that it no longer has the freshness of a time. For a subsequent period of one year the task was entrusted to Maestro Imola irons that will pass the baton to fellow Teacher who happily brought Feeley completed the cycle of Peregrinatio will leave the place to the Maestro Giulio Montanari. However, in 1953, the band for not being able to bear the financial burden of an external Manager, commissioned the master Fernando Babar to replace it. What could seem like a stopgap, obbligato has since proved to be a stable and successful solution. The beginning of the third millennium is awesome, the Director Baroncini, eighty years old, still has the enthusiasm and desire to do a kid: the August 30, 2003 but he leaves us. In recent times, minato in physical, but not in mind, illness, tried not to let the components disabled, offering advice and passing over to Carlo Pandolfi who now runs the Corpo Bandistico Folkloristico Dozzese. 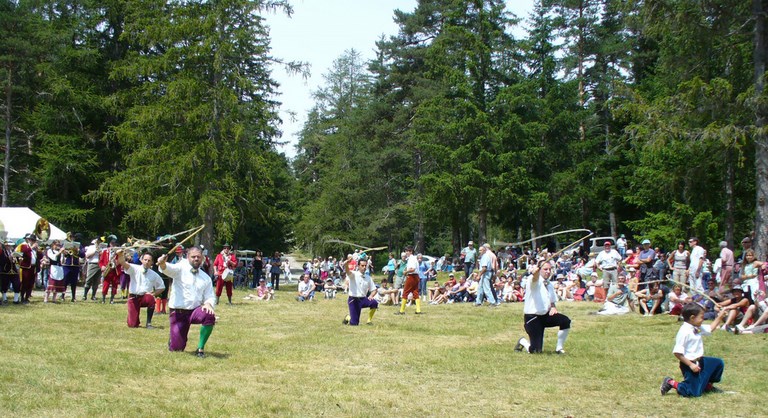 On the occasion of social lunch consumed in Brisighella in 1963, the bandsmen, rather than make the siesta to levar canteens, took to the streets by improvising songs of their repertoire. Two b young Cao Matteo said Maciol and Francesco Piancastelli said sniper, spontaneously joined the bandsmen exhibiting whips old type birocciai accompanying the scores with whip snaps synchronic. Were defined Is ciucaren and since that time, thanks to the foresight of Maestro Fernando wanted to insert them Baroncini (first band in Romagna) as an integral part of the Band, they haven't left the band evolved in people but not in the content up to the present day. The ' ciucaren in Romagna are the heirs of those who birocciai during long journeys aboard oxcarts, company were whistling allegre marcette, accompanied always careful not to hit the animal, with the snap of the whip.

In 1975 he decided to take a costume figure who represented the origins of the earth from which we come, must be selected so as to dress the Romagna '700 dressed up, but as it appeared when it was a Sunday parade "of the' wedding party 'while he is going to Mass with the horse of St. Francis? To find out, we must search patiently antique prints libraries of Imola, Faenza, Forlì and the University of Bologna. It turns out that the common people dressed in striped and wore a "galantine" in the head, but this was not the best of 'elegance to a uniform folklore. The collections d 'era, viewed together with the greater provincial tourist board, offered valuable insights into all incorporated with the' addition of some civet eria more that never hurts